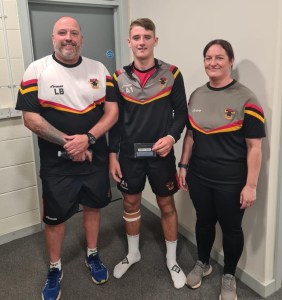 Player of the Month for June 2022 GEORGE FLANAGAN JR Academy coach Mick Piper said "George has had a wonderful year to date, cementing himself in our academy side, being an important member of our leadership group, making the Yorkshire squad and making his first team debut with his dad. None of us are surprised that George has achieved what he has so far, his dedication and hard work is second to none. Congratulations George, we’re all really proud of you!"   Want to support the development of young players at the Bulls join BullBuilder https://membermojo.co.uk/bullbuilder/joinus or if you wish to make a donation http://www.bullbuilder.co.uk/donations/ BullBuilder (Bradford Bulls Supporters Trust) is the Club’s independent supporters trust, focused on attracting, developing and retaining young talent in the Bradford Bulls Academy. BullBuilder is an Industrial and Provident Society, and is registered with the Financial Conduct Authority (FCA) as Bradford Rugby League Supporters Society Limited.