Academy coaching staff at Bradford Bulls no longer have to travel to Odsal to perform admin tasks thanks to BullBuilder, who have purchased the Academy a brand new “all in one” printing device. 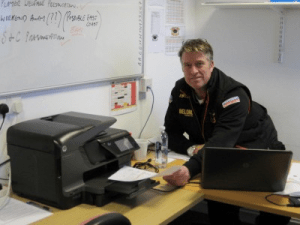 The “all in one” printer allows staff to print out and scan documents and make photocopies. BullBuilder Chairman Mike Farren said “We had a request from John Bastian who said that such a device would make his staff’s lives much easier and make their work far more efficient. Until now staff would have to go to Odsal to do things like scan documents or perform large print jobs. Now they have a device dedicated for their use only that is based in their office at Tong.” Academy coach John Bastian said “The coaching staff are very grateful to BullBuilder and the members that contribute monies to them to make these kind of donations possible. This equipment is invaluable for printing information for players that might relate to player performance or training plans. It will also save time and money as it allows us to scan documents on the premises without having to go to the office at Odsal to do it, which took up valuable time. We also get a lot of information from the RFL and other bodies that often requires printed copies. We now have the equipment to service these needs.” BullBuilder will shortly be publicising details of events taking place in 2015. Bulls fans wishing find out more can visit the BullBuilder website at http://www.bullbuilder.co.uk/ or write to BullBuilder, Bradford Rugby League Supporters Society Ltd, Suite 2 Buttershaw Works, Buttershaw Lane, Bradford, BD6 2DD.