BullBuilder is pleased to announce the winner of the U19s player of the month for July. The July award goes to fullback Alix Stephenson.   Alix, who comes from Bradford and the Queensbury community club is pacey fullback who has made his mark in the U19s and reserves this season. Head of Youth John Bastian said “Alix has a lot of facets to his game. He’s good at organising the defence and poses an attacking threat on the edges and up the middle.  Fullback is a pivotal position and he has improved his game and got a lot smarter in the 12 months he’s been with us.    He’s now starting to see the bigger picture and his challenge now is to put in consistent performances across all areas of his game on a week by week basis.” “I’m very pleased for Alix that he’s won this award, it’s well deserved and there’s a lot more to come from him.    He’ll learn a lot from Gregg McNally and Brandon Pickersgill and he’ll provide healthy competition for them next season.” BullBuilder chairman Paul Butterworth said “It’s great to see yet another Bradford lad win the player of the month award.  Alix has been very impressive at fullback this season.” Alix’s performances have come as the U19s have built some momentum against the top academy sides recently.  John Bastian said “We had been building nicely before the home victory over Leeds Rhinos where we got a well deserved win and put in a pleasing performance.  We had a tough away fixture at St Helens where we lost narrowly but looking back on that I think we can improve in a number of areas.   The next game against Wigan will provide another stern test.  After that are three more games against Huddersfield, City of Hull and Catalans.  I’d urge supporters to come and get behind the team.” Alix will receive his award at pitchside at half time during the match versus Workington on 19th August.   Alix is sponsored by Horne Surveyors.   He will receive his award from BullBuilder board member Toni Hoggett. On 11 September BullBuilder will be hosting the U16's and U19's Player of the Year Awards, the Paul Fisher Outstanding Achievement Award and Academic Achievements Award evening.  This will take place in the Southbank at Odsal with tickets available for purchase from the Club shop soon.  Tickets will be £5 and include a pie and pea supper.  More details will follow soon. To find out more about BullBuilder and how to join for as little as £10 a year please visit https://membermojo.co.uk/bullbuilder/joinus 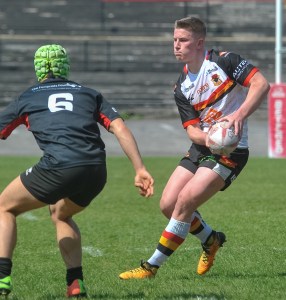