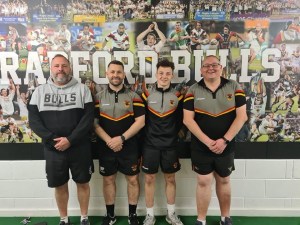 BULLBUILDER/BULLS MAY PLAYER OF THE MONTH ETHAN BANHAM Congratulations to Ethan who wins the player of the month for May. Academy coach Mick Piper said "We first saw Ethan playing rugby league for his college team and immediately saw the traits we look for in a Bradford Bulls player. His effort and commitment is second to none and since joining us has gone from strength to strength. Ethan is a regular starter for us now and we’re excited to continue working with him and watching his continued growth, both on and off the field." Well done Ethan   Want to support the development of young players at the Bulls join BullBuilder https://membermojo.co.uk/bullbuilder/joinus or if you wish to make a donation http://www.bullbuilder.co.uk/donations/ BullBuilder (Bradford Bulls Supporters Trust) is the Club’s independent supporters trust, focused on attracting, developing and retaining young talent in the Bradford Bulls Academy. BullBuilder is an Industrial and Provident Society, and is registered with the Financial Conduct Authority (FCA) as Bradford Rugby League Supporters Society Limited.