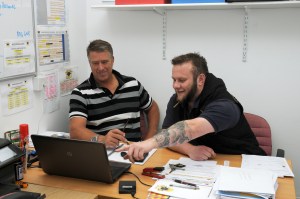 Last week BullBuilder caught up with Bulls Head of Youth John Bastian and new U16 coach Mark Dunning.    BullBuilder is providing a significant cash injection into the U16 coaching set up in 2017 and BullBuilder member Sam Grundy asked Mark Dunning what member’s contributions would be going toward: “It’s going to be a continuation of the good honest hard work done over the last few years.   I’ve been involved in the Scholarship programme now for 4 years.   It’s had a new focus and mindset over the past 2-3 years and you’ll see a continuation of that.” “Through John, Robin and the scouting network we recruit U14 and U15 players who take on a 2 year scholarship with the club.  We hopefully progress them into Academy level competition after U16s is done.   John and the scouts cast the net pretty wide.  They’re out on Sunday mornings in all weather and travel all over.” “There are different challenges each year – different kids each year with different backgrounds, needs and abilities.  We thrive on those challenges and try to make these kids better people as well as better players.” “A typical U16 will get into a gym programme to improve him physically and we’ll help with dealing off field challenges that young adults face.  The main thing is we’re trying to make RL players out of them so they get good coaching.   It’s all something we’re passionate about.” “It’s not always about results on the field at this stage but for the last two years we’ve done very well and we’ve also done well producing players for the U19s which is key to what we do and I’ll be carrying on the good work that Leigh Beattie did.  We have fourteen players moving up to the U19s for 2017.   For the last two years that number has been in double figures, which was not happening before.     When I go back to when I played as a junior for the Bulls that was unheard of.    That’s testament to the programme and what we do.” John Bastian added “I’d also say we’re increasing all the time the number of Bradford based players as well as those from other places.  I’m delighted these numbers are going up.  We have gone up from 13% of our U16s being from Bradford in 2014 to 40% in 2016 our squad that are post coded to Bradford, which is very good numbers and a big increase in 2 years.” John Bastian was fulsome in his praise for Mark:  “Where Mark Dunning’s concerned he’s certainly progressed over the last few years.  His contribution and dedication has been top drawer.  Not just to the U16s programme but he goes out and watches junior games and has worked really hard with the U19s and anything that’s been asked of him as a volunteer so his promotion has been well earned over the past 4 years including before I was here.”   “I’m delighted that BullBuilder are financially contributing toward Mark’s position, which will help him develop and progress as a coach and will certainly have an influence on the junior players we’re bringing through our ranks here at Bradford Bulls.” Mark summed up how he and the rest of the staff value the contributions of BullBuilder members : “If you’re a supporter of the club you’ve got to be a supporter of BullBuilder because the work they do is absolutely fantastic and invaluable to the programme that John’s put together.   I can’t speak highly enough of the organisation.  Embrace it and get involved.” BullBuilder will be contributing even more to help the U16s and U19s next season.  Over £600 was raised in the bucket collection at the semi-final against Dewsbury last week.  Thanks to your contributions we can help provide the help that John, Leigh and Mark need in 2017. To find out more and how to join for as little as £10 a year please visit www.Bullbuilder.co.uk