Academy Aim for Excellence While the Bulls Academy goes from strength to strength on the field it’s also leading the way off it with several players taking the Advanced Level Apprenticeship in Sporting Excellence AASE qualification and following the examples of double Olympic Gold Medallist Rebecca Adlington and England football international Jack Wilshere. It provides a structured training and development route across a number of sports for talented young athletes (aged 16-19), who have a real chance of excelling in their sport; either by competing on the world stage or securing a professional contract. The AASE programme reflects the range of skills, knowledge and performance criteria required in elite level sport. It is designed to directly measure the athlete’s ability to plan, apply and evaluate their development in the appropriate technical, tactical, physical and psychological aspects of their sport. It also addresses wider issues such as lifestyle, career development, communication and health and safety. There are currently more than 2500 athletes on the AASE throughout England and the Bulls have been part of it with 70-80% of the academy doing the BTEC and AASE course with James Bentley, Lewis Ainley, Brandan Wilkinson and Matthew Crimes being offered University places this year as a result. Head of Youth John Bastian explained:   “This qualification is aimed at those athletes with proven ability or the potential to play at the highest level .” From Tiny Acorns comes Oakes U19 Centre Ross Oakes was the recipient of the BullBuilder player of the month award for July which was awarded last weekend.  The young centre has had some standout games for the academy and been rewarded with selection in the first team squad this season.      Ross commented: “It’s down to hard work and determination and the help of my teammates working for each other.”     Ross is one of six U19s rewarded with a first team contract for 2017.  “I’ll be working hard in pre-season and will be aiming to get in the starting 17.” His sponsors , grandparents, Maureen and Geoff Hammond said “The U19s have been doing very well this season and it’s down to determination and hard work.  The coaching staff led by John Bastian and his team have done a brilliant job and brought the best out of the players and got them playing as a team.” John Bastian said “Ross probably under achieved last year and when Matt Diskin and I discussed his progress in 2015 we weren’t sure about him.  He was offered a basic contract and under put under no illusions as to what he had to do to succeed.   He could’ve walked away and sulked but instead he came back for pre-season in really good shape and was almost like a different person.  He’s worked very hard and shown very good application and attitude which has been recognised by ourselves and Rohan Smith. All credit to Ross.” To find out more visit www.BullBuilder.co.uk 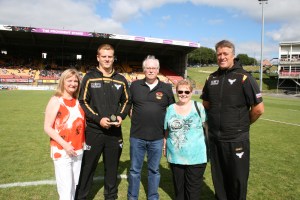 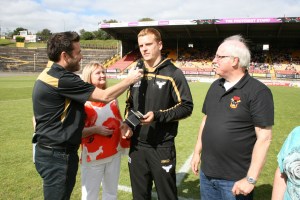