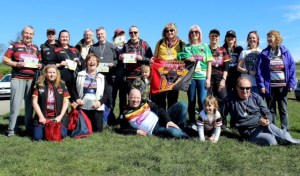 Raising funds is a stroll with BullBuilder Not to late to make a donation: Support by donating via Crowdfunder on http://www.crowdfunder.co.uk/bradford-bulls-academy-changing-rooms-renovation  or by sending a cheque to Bradford Rugby League Supporters Society Ltd, Suite 2 Buttershaw Works, Buttershaw Lane, Bradford, BD6 2DD. Well over twenty Bulls fans took a stroll to Dewsbury in the spring sunshine… and look set to raise over £2,000 in the process! The intrepid bunch, who included Chairman Marc Green and Bulls CEO and legend Robbie Hunter-Paul set off on a sponsored walk early on the morning of the Dewsbury away fixture. All were sponsored on the ‘Dewsbury Dawdle’, with the aim of raising funds to help upgrade changing facilities for the junior teams. The walk of around 11 miles was mostly off-road, taking in the Spen and Calder Greenways, where the main challenge was being constantly alert for the pelotons of cyclists out in force to enjoy glorious spring weather. In addition to those taking part, a support team set up stall every few miles, to keep the walkers fuelled with home-made cakes, and snacks generously provided by Seabrook Crisps, the Tesco stores in Halifax Road and Cleckheaton, and Wibsey Co-op. The final stretch, from Dewsbury town centre to the Rams’ ground proved to be a little more demanding, with one walker taking to social media to plead, “Can we do one without so much of an incline at the end?” However, all walkers arrived safely and in good spirits – accompanied by BullBoy on the final few hundred yards – and were rewarded by victory and a much improved performance from the team, and with a medal to commemorate their efforts. Walk organiser and BullBuilder committee member David Lowdell said, “I’d like to thank Marc & Robbie for walking with us; Seabrook Crisps, Tesco Halifax Road and Cleckheaton, Wibsey Co-op for their generous donation of supplies; my wife Jill, daughter Emma and grandchildren Becky & Rosie for baking and running the refreshment stations; and Bradford Trophy centre for the medals.” BullBuilder chair Paul Butterworth commented, “Refurbishing the junior teams’ changing facilities is a major priority for us. We have a tough target, in the region of £5,000, to reach, but the sponsorship money that has already poured in gets us off to a flying start. “We’re delighted that Marc, Robbie and so many fans have shown how much they value our efforts by taking part. Others can also support us by donating via Crowdfunder on http://www.crowdfunder.co.uk/bradford-bulls-academy-changing-rooms-renovation, sending a cheque to Bradford Rugby League Supporters Society Ltd, Suite 2 Buttershaw Works, Buttershaw Lane, Bradford, BD6 2DD, or joining BullBuilder at http://www.bullbuilder.co.uk/join/. “Watch out, too for further events as we work toward our total and raise funds for other worthwhile projects to support our future stars.”