The BullBuilder accounts for 2016/17 have now been audited and sent to BullBuilder members for approval at the AGM on 18th January. We think that many Bulls fans might be interested so here are a few headlines regarding our activities in the year to 31st August 2017. INCOME - Totalling 22,110 the main sources of income were- Subscriptions from members- 2763 Donations - 2951 Grants received. - 6000 Events - Quiz Night. 1424 Spring Ball. 3825 Batley Walk 4415 GRANTS TO THE ACADEMY - Totalled £16555 Main grants included Academy Development Plan Coaching Support. –  http://www.bullbuilder.co.uk/news/u16s- ... -strength/ New Gym Track. 4G Pitch hire. Trophies. – http://www.bullbuilder.co.uk/news/young ... ar-awards/ Analytic System and Laptops. – http://www.bullbuilder.co.uk/news/bullb ... t-support/ Tractor. – http://www.bullbuilder.co.uk/news/bullb ... x-tractor/ Our administration expenses were minimal - £192 and we had a healthy balance of over £12,000 at the end of the financial year. In the 17 weeks since the 1st September we have contributed a further £9086 in grants to the youth structure at the club. The main grants have been: Tackle Shields - https://twitter.com/BullsTrust/status/9 ... 9749528576 Coaching Support. -  http://www.bullbuilder.co.uk/news/lifes ... llbuilder/ New Medical Flooring- https://twitter.com/BullsTrust/status/9 ... 2177855491 New Weights. – http://www.bullbuilder.co.uk/news/the-weight-is-over-for-junior-bulls/ During that 17 weeks, in addition to our regular member subscription and donations ,we have supplemented income by holding a very successful Race Night, an impromptu (and profitable !) silent auction at the club's Anniversary Dinner and an e bay auction of Bulls shirts kindly donated by John Bastian and his team. Everything we've done in the past few years has been made possible by the generosity of our members and the incredible participation of both members and non members in our various fund raising activities. Despite all the turmoil of the recent past we still have a thriving Academy. Our AGM will be held at Tong on the 18th.starting at 7pm. The formal business should be cleared quickly and will be followed by a "tour" of the training facilities conducted by John Bastian and his team. He'll be highlighting some of the equipment provided by BullBuilder. It's not too late to join BullBuilder and sample the delights(?) of our AGM and witness the value that Bulls fans have added to the club's youth structure.  https://membermojo.co.uk/bullbuilder/joinus 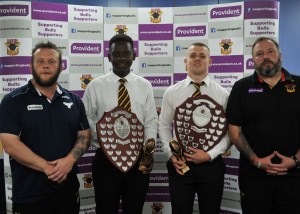