The pitch at Odsal will be looking pristine this season thanks to a donation from BullBuilder that has paid for a brand new tractor.   Head of Youth John Bastian explained: “Our old tractor was worn out and needed replacing and Bulls Stadium Manager Mark Leadbeater did a great job in finding a new model.   This came at a competitive price from Frank Archibald at AA Mowers.   BullBuilder then made its purchase possible with a sizeable donation from their members.” “The pitch at Odsal is used by both first team, youth teams and for training.  Having the tractor will make upkeep easier through the wetter winter months and mean we have a good surface throughout the summer. It will also serve as a backup tractor for keeping training pitches in order at Tong.” BullBuilder chairman Paul Butterworth commented:  “The tractor is a significant investment but one that will have a huge positive effect.    A good playing surface makes all the difference to players.” BullBuilder has contributed funds to replace the physiotherapy room floor with a brand new medical vinyl surface.   John Bastian said:  “Mark Leadbeater’s team have done a superb job on renovating the whole training base in the close season.   The entire complex has been refurbished with painting and decorating taking place throughout, including the shower areas.     A company also came in and took up the old flooring in the physio room and put down a new surface.  It now looks very professional and ensures there is a clean environment for players that are receiving treatment.  It’s made a huge difference.” “BullBuilder also paid for new matting in the gym and new tackle bags and shields.    All these contributions make a big difference and I’d like to thank BullBuilder and their members for their great support.  It’s really appreciated by the players and staff.” Paul Butterworth said “BullBuilder has received some great support from its members this year and it’s enabled us to continue to help the club’s youth development in a number of ways.  I’d like to thank our members for their wonderful support.  It’s making a real difference.” As pre-season training is now in full swing John Bastian gave an update on progress:  “The players know what we expect from them now.   The U19s and U16s are responding and we’re in a good place as far as playing ability is concerned and we continue to be on the lookout for new talent.  Everyone is working hard to meet the very high standards we set at the club.   In any sporting environment the strong willed and minded will progress but some will fall by the wayside.” To find out more about BullBuilder and how to join for as little as £10 a year please visit www.Bullbuilder.co.uk PICTURE BELOW SHOWS BULLBUILDER CHAIRMAN PAUL BUTTERWORTH RECEIVIING KEYS FROM FRANK ARCHIBALD FROM AA MOWERS.   LEFT IS MARK LEADBEATER (STADIUM MANAGER) AND RIGHT IS JAMIE FINDLAY (ASSISTANT GROUNDSMAN). 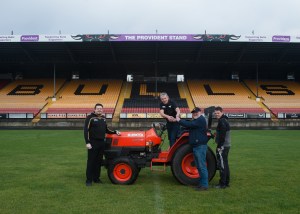