OLIVER Scott named BullBuilder’s ‘Trainer of the Month’ - following the Academy’s return to pre-season in November. As professional sport has been allowed to continue, the Academy team have been in intense preparation for the upcoming season, in Covid-19 secure facilities to ensure the players health and safety remains paramount. The award aims to highlight the hard work put in by the players during the training sessions – and showcases BullBuilder’s continued support in the development of the next generation of Bradford Bulls stars. Academy head coach Leigh Beattie has commented on the awarding of Oliver Scott as the BullBuilder trainer of the month and the return to training. “It has been great to finally be back at training after months off, it’s good that we can still get some training in during these circumstances,” said Beattie, who is sponsored by BullBuilder. “The lads were eager to get back and now they’ve got into the swing of things, they look really sharp. “Oliver (Scott) has been training really hard and putting in that extra effort to ensure he’s ready for the season. He’s also taken time out of his day to help coach at our clubs ETP sessions, he really deserves this award. “This award doesn’t take away from the fact that the whole squad has been working really hard and I’m really pleased with all their progress so far. “I would also like to thank BullBuilder for their incredible continued support of our club’s Academy system.” 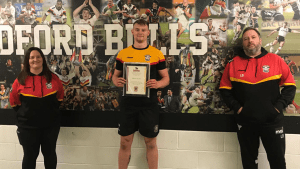