The Bulls received a boost last week in the form of their official Academy accreditation rating from the RFL. BullBuilder received praise in the accreditation report for the investments made in equipment such as the leg press and jump mat.  These investments are possible thanks to BullBuilder members and supporters, it’s your donations that have a direct positive effect on the development of our young players.   An increasing number of young players are beginning to progress into the first team so the benefit of having a good Academy is there for all to see. The report identified a number of areas for the club to work on to ensure the Academy continues to improve and BullBuilder will be doing its bit to help.    If you want to be a part of it then why not come to our Race Night on Wednesday 22 June at the Legend’s Suite, Odsal, kicking off at 6.30pm.   There will be 7 televised horse races and even a pig race to end the evening. A pie and pea supper will be served.  All proceeds are to go to BullBuilder continue to help the up and coming stars of the future.  These events have been a big success in the past and all supporters are welcome. We will be joined at the event by Rohan Smith, John Bastion (Head of Youth Development),  Academy Players and Coaching Staff,  Kurt Haggerty, Adam O’Brien, management and directors of the Bradford Bulls.   Tickets are £5 and available from the club shop or by contacting David Lowdell on 01274 69030.   They are also available online at https://www.eventbrite.co.uk/e/bullbuilder-race-night-tickets-25535685924 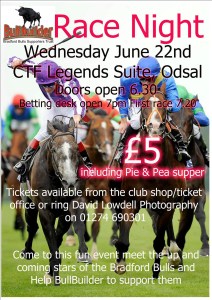