BullBuilder is pleased to announce the winners of the U19s player of the month for March and April. The March award goes to loose forward Matthew Fletcher.   Matthew, who comes from Oldham and the Waterhead community club made a strong start to the season and has caught the eye of the coaching staff. Head of Youth John Bastian said “Matthew has worked hard on his fitness which has taken him to another level.   He’s got an unselfish attitude and is always there to make the hard carries and is defensively solid.   His workrate is terrific and the staff are very pleased with his progress so far.   In the first third of the season he’s been very committed and competitive.    He’s showed real signs of improvement and we now want him to continue to challenge himself.” The April award goes to front rower Oliver Wilson.  Olly, who comes from the Greetland community club signed a three year deal with the club last year and has continued to improve in 2018. John Bastian said “Olly has been a consistently impressive performer in the front row for the U19s and has also moved up to reserve grade rugby.    Like Matty Fletcher, Olly has a terrific attitude and has shown great effort and commitment.   His work ethic is excellent and his skills are improving. BullBuilder chairman Paul Butterworth said “It’s pleasing to see the next generation of Bulls players progressing so well.   Matthew and Olly are following previous BullBuilder U19 players of the month such as Liam Kirk, Reiss Butterworth and Evan Hodgson who went on to represent the first team.   The production line is flourishing.” Both players will received their awards pitchside at half time during the match versus West Wales on 6th May.   Matthew who is sponsored by Janet Burns, received his from his sponsor’s representative Maria Humpherson and Olly who is sponsored by the Goodwin Family received his from Sue Cater, Vice Chair of BullBuilder. To find out more about BullBuilder and how to join for as little as £10 a year please visit https://membermojo.co.uk/bullbuilder/joinus 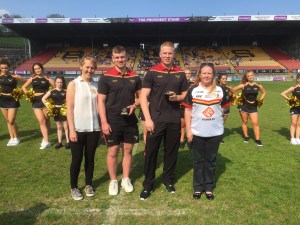