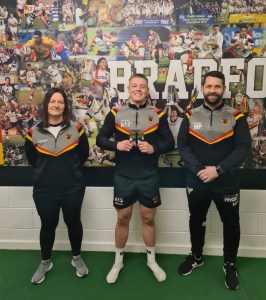 February trainer of the month Bailey Arnold. Bradley has been presented with his award of an Amazon voucher. Picture attached of Bradley with Academy Assistant Coach Mick Piper and Toni Hoggett BullBuilder Board Member. Quote from coaches, “Bailey has been fantastic since joining us, he has slotted perfectly into our environment. He gives nothing short of 100% in everything he does and it’s shown in his growth both on and off the field. We start our season next week against Hull KR and he’s put himself in contention to make the team.” Want to support the development of young players at the Bulls join BullBuilder https://membermojo.co.uk/bullbuilder/joinus or if you wish to make a donation http://www.bullbuilder.co.uk/donations/ BullBuilder (Bradford Bulls Supporters Trust) is the Club’s independent supporters trust, focused on attracting, developing and retaining young talent in the Bradford Bulls Academy. BullBuilder is an Industrial and Provident Society, and is registered with the Financial Conduct Authority (FCA) as Bradford Rugby League Supporters Society Limited.