BullBuilder is pleased to announce the final winner of the U19s player of the month award for 2018. The August award goes to stand off Rowan Milnes.   Rowan comes from Bradford but came via the Siddal community club.  He made his mark with some classy performances in the U19s and reserves and made two first team appearances this season. Head of Youth John Bastian said “Rowan has had a wonderful year. He’s an intelligent, playmaking stand-off half who has shown a great deal of maturity this year.  He’s not only excelled for the U19s but also the reserve grade and for Yorkshire Origin U18s versus Lancashire.  He has featured in the first team and has been working with John Kear to develop his game further.  He’s still got another year in the U19s to go so that shows how well he is developing.” “Rowan is just the right sort of person we want at the club and he has a very strong supportive family behind him.   He’s still learning the game and developing physically.  As he develops his defence and his positional awareness he will provide some healthy competition for the first team half backs in 2019.” BullBuilder chairman Paul Butterworth said “Rowan is another Bradford born player to win this award and he has a bright future ahead of him.” Rowan will receive his award at pitchside at half time during the match versus Workington on 7th October   Rowan is sponsored by the Erby family.   He will receive his award from the Erby family Jackie, Derek, Tracey and Amy together with BullBuilder board members Mary-Jo Daly and Kelly Hargreaves. On Wednesday 14th November BullBuilder will be hosting a race night.  This will take place in the Southbank at Odsal with tickets available for purchase from the Club shop.  Tickets will be £5 and include a pie and pea supper.  Tickets can also be bought on line at https://bullbuilder.nutickets.com/52723 Paul Butterworth said “The race nights are always an enjoyable evening and very popular.  Everyone is welcome and all funds raised go toward junior development at the Bulls.” To find out more about BullBuilder and how to join for as little as £10 a year please visit https://membermojo.co.uk/bullbuilder/joinus 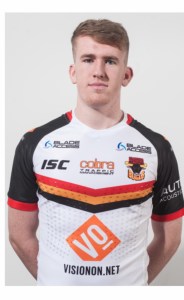 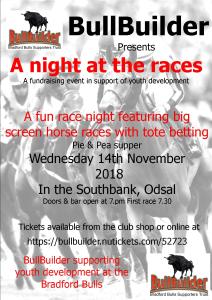