News that a number of academy products, including four recent graduates, have signed new 1st team contracts is another shot in the arm for the club, the academy and Bullbuilder. Alex Mellor, Nathan Conroy and Sam Bates have all had a taste of 1st team action and seen their pictures appear on the board of graduates at the Training Centre at Tong and Adam Brook will surely be adding his picture soon. Those of you that have seen these players in action will know what rich potential they have. 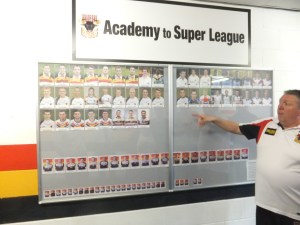 Board showing Academy graduates who have played in Super League

Bullbuilder chairman Mike Farren said “It’s very pleasing indeed to see Alex, Nathan, Sam and Adam sign new deals with the club. It’s reward for their hard work and talent and must be very satisfying for the staff to see them come through. I look forward to seeing them - and others - make an impact in the first team in 2015.” Considering the upheaval of recent seasons, the fact that the academy is rated as the best in Yorkshire is something we can be proud of and need to shout from the rooftops. It’s a testament to the staff at the club who’ve not allowed events in the recent past to distract them. These signings show the system bearing fruit. Bullbuilder will be ensuring that this production line continues to be supported and is in the process of organising a number of events to do just that. The great Wigan coach of the 90s John Monie said in his biography that out of each academy intake he had at Wigan only 2 or 3 could expect to make it 1st team action and only one of those might become a regular 1st team player, let alone an international. That was when Wigan monopolised the best young talent in the country. Looking at the number of Bulls academy players that have gone on to achieve great things this shows what a valuable resource it is. Now that the club has a stable set up off field the academy can develop without the distraction of off field matters. Who knows what it can go on to achieve? Mike Farren said “Bullbuilder will continue to provide the special “extras” to enhance young player development and continue to make Bradford Bulls the outstanding academy in Yorkshire and become the best in the country. We would like to thank our members for the financial, organisational and moral support they contribute!” You can join or re-join BullBuilder by visiting our website at http://www.bullbuilder.co.uk/. For more information, please Email us at info@bullbuilder.co.uk or write to us at Bradford Rugby League Supporters Society Ltd, Suite 2 Buttershaw Works, Buttershaw Lane, Bradford, BD6 2DD.