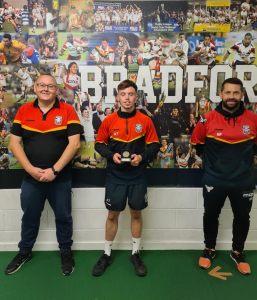 BullBuilder/Bulls June Player of the Month - Lewis Camden Leigh Beattie (Head of Youth) said: Lewis is a valuable member of our squad. He has played full back and half back this year and he is a very illusive player with great footwork at the line. He has also showed a lot of mental resilience and toughness as he has been playing with an injured knee for a number of weeks which has had fluid on it but he has battled through. Lewis has also just been selected to play for Yorkshire in the Yorkshire v Lancashire origin series and this is fully deserved. Lewis was presented with his award by Jason Taylor (BullBuilder Board Member). BullBuilder will be holding a Race Night on the 30th of September (in the SouthBank at Odsal Stadium) to raise funds to support the development of young players at the bulls.  Tickets are available on line https://bullbuilder.nuwebgroup.com/events/6087 Tickets will in the near future be available from the Club Shop, full details will be available in the near future. Want to support the development of young players at the Bulls join BullBuilder https://membermojo.co.uk/bullbuilder/joinus or if you wish to make a donation http://www.bullbuilder.co.uk/donations/ BullBuilder (Bradford Bulls Supporters Trust) is the Club’s independent supporters trust, focused on attracting, developing and retaining young talent in the Bradford Bulls Academy. BullBuilder is an Industrial and Provident Society, and is registered with the Financial Conduct Authority (FCA) as Bradford Rugby League Supporters Society Limited.