BullBuilder, the Bradford Bulls supporter’s trust has honoured the Bulls Head of Youth John Bastian with an award for his outstanding contribution to youth development. John arrived at the club in 2014 to oversee the Bulls’ entire youth development system which includes the scholars in the under 16s and the academy prospects in the under 19s.    He held the same role at Leeds and Warrington previously and also had a spell as head coach at Featherstone Rovers. BullBuilder chairman Paul Butterworth explained:  “John has been a tower of strength at the club for the past four years and has remained steadfastly loyal despite some ups and downs off the field.   He’s maintained an air of positivity, enthusiasm and good humour that is infectious and has been instrumental in keeping the club’s youth systems at a level better than many Super League clubs.   His professionalism and attention to detail has helped instil a positive and respectful culture amongst the young players.” “When he arrived the club already had some good things in place with regard to youth development but John has moved things onto another level.    It’s testament to his efforts that as a League 1 club we continue to compete with the Super League clubs like Leeds and Wigan.  The U19s recent win over St Helens U19s shows the talent that is coming through and many current Bulls first teamers such as Ethan Ryan and Liam Kirk came through on John’s watch.” “I’m sure John would point to the dedication and expertise of fellow coaches Leigh Beattie and Mark Dunning as well as the work done in the community as making all this possible but we wanted to give him some recognition for all he’s done.” “BullBuilder enjoys an excellent relationship with John and the rest of the staff which is going from strength to strength.   We hope this award gives John a bit of recognition for all he’s done for the club.” To find out more about BullBuilder and how to join for as little as £10 a year please visit https://membermojo.co.uk/bullbuilder/joinus 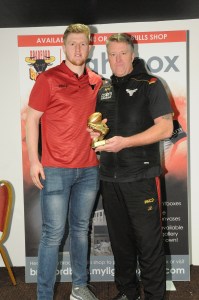