BullBuilder is pleased to announce the winner of the U19s player of the month for June. The June award goes to loose forward Matthew Storton   Matthew, who comes from Bradford and the West Bowling community club is a strong running backrow forward who has made his mark in the U19s and Reserves this season. Head of Youth John Bastian said “Matthew is really hardworking and consistent in everything he does.  He’s had a couple of tough injuries and come through the other side and is a very bright prospect.  What’s shone out this season is his attitude.  He’s an enthusiastic trainer who always arrives early and plays with a high level of commitment.   Over the past six months he’s worked on his defence and he also now runs the ball in not only with great power but also with great speed and runs good lines. “In games he’s always near the top of the statistics for quality and his performances are of consistent high quality.  If he keeps developing as he is he will be ready for first team action when John Kear calls upon him.” BullBuilder chairman Paul Butterworth said “It’s pleasing to see another Bradford lad win the player of the month award and follow in the footsteps of some big names.  He’s had a great season so far.” Matthew will receive his award in the Southbank pre York match on 22nd July.   Matty will receive this from his sponsor Jen Bennison. To find out more about BullBuilder and how to join for as little as £10 a year please visit https://membermojo.co.uk/bullbuilder/joinus 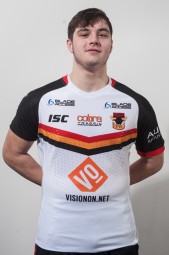