Thanks to the support of BullBuilder young players at Bradford Bulls will be getting the benefit of more cutting edge technology. The NacSport System is a sports performance analysis tool that is currently used by coaches and players to break down video footage of games.  This is then compiled to identify areas of good play and areas for improvement to help players improve their game. Head of Youth John Bastian said: “The system helps break down games so that individual players are assessed.  Each gets a points total and the system can look at attacking play, defensive play, kicking and other facets of the game.  It helps to point out good things players do on the field and areas for improvement.” BullBuilder has helped us upgrade the system currently used by the Bulls to offer more advanced systems including new licenses and monitors.  This is an elite system.” John Bastian said “The new equipment and licenses from BullBuilder will allow players and coaches to drill down even further into footage of their performance on the field.  It enables coaches and players to give more attention to detail which will improve performances.” The system should have a knock on effect on player performance and ensure constant improvement for those players that use it to its fullest.” Josh Bryan from Analysis Pro recently spent time with coaches Leigh Beattie and Mark Dunning and the players to provide education in using the new systems so they can get the most out of the upgraded equipment and software. BullBuilder chairman Paul Butterworth said “It’s thanks to the generosity of BullBuilder members and supporters that we were able to provide the funding to get this equipment and we think it will be of great benefit to the coaching staff and players.  In the modern game we can leave no stone unturned as we seek to provide the best coaching and support to young players.” Some of the first users of the equipment were the Bulls players who have just been selected for the National Youth Performance Programme, Jake Judson, Lewis Camden, Taylor Mail and Jacob Beety, (pictured). BullBuilder members and Bulls supporters who would like to help continue to support youth development should be aware that the annual quiz night takes place at Odsal on Friday 1st March. Paul Butterworth said:  “Last year this was a great success we hope to match or even better last year’s efforts.  Ross Peltier has very kindly offered to be a Quiz Master and the event will be attended by players and staff.” “The Bulls are supporting the event and will provide a fabulous Team Prize for 4 to 6 people, hospitality in the Southbank including free food at a home league game of the winning team’s choice.” Tickets are £5 per person or £20 for a Team of 4/6 people. Tickets can be purchased from the Club shop or on line via: https://bullbuilder.nutickets.com/54950096  or contact David Lowdell on 07584259103. To find out more about BullBuilder and how to join for as little as £10 a year please visit https://membermojo.co.uk/bullbuilder/joinus 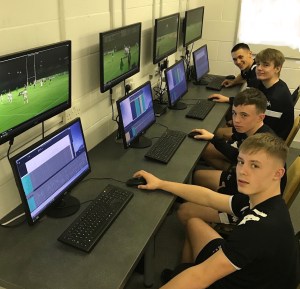