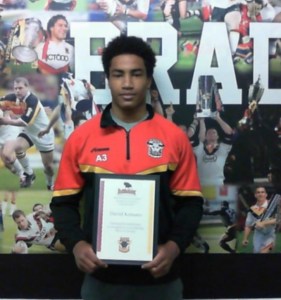 David Kamano has been named as BullBuilder Trainer of the Month for February. Leigh Beattie (Head of Youth Development at the Bulls) said ‘since returning to training, David has shown nothing but 100% effort. His actions have lead from the front and his attitude of late is exactly what we need from him.’ ‘David has been fantastic this month. His testing scores have been very high and his overall attitude towards training and admin has been brilliant. He thoroughly deserves his award’ Many thanks to all BullBuilder members and supporters for making this possible, your support is greatly appreciated. To support young player development at the Bulls, join BullBuilder https://membermojo.co.uk/bullbuilder/joinus or if you wish to make a donation http://www.bullbuilder.co.uk/donations/ BullBuilder (Bradford Bulls Supporters Trust) is the Club’s independent supporters trust, focused on attracting, developing and retaining young talent in the Bradford Bulls Academy. BullBuilder is an Industrial and Provident Society, and is registered with the Financial Conduct Authority (FCA) as Bradford Rugby League Supporters Society Limited.