Bradford Bulls’ Supporters’ Trust BullBuilder hosted a very successful Question and Answer session with the Bulls’ coaching team on Monday 24th November. The intention of the Q&A was to allow supporters to find out more about the club’s philosophy for developing young players and understand how they might play a part by joining BullBuilder. Key to this was the insight provided by the new Head of Youth John Bastian and Under 19s Coach Matt Diskin, but Head Coach James Lowes and Assistant Karl Harrison were also in attendance, emphasising the importance being placed on junior rugby by the new coaching regime. With over forty people in attendance, the evening began with Chairman Mike Farren and Treasurer Natalie Farr handing over a cheque for £1,500 to enable the club to buy a trailer, which will be used to ensure that training pitches for the Academy can be maintained throughout the winter. 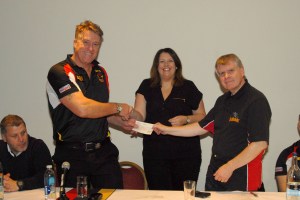 A panel discussion about junior rugby followed, in which John Bastian explained the set-up, with the other coaches contributing – when, according to James Lowes – they were allowed to get a word in, such was John’s enthusiasm! Interesting insights included the sheer level of commitment to the development of young players, with John stating that he did not believe the often quoted figure, that only a couple of players per year would make the grade, should be treated as gospel – with hard work and good coaching, there should be no limit. He also related his experience of working with a Supporters’ Trust, like BullBuilder, during his time at Warrington, explaining how the Trust there enabled the fans to play a crucial role, as the club shifted the emphasis to the development of local talent – an approach that has paid handsome dividends for them. 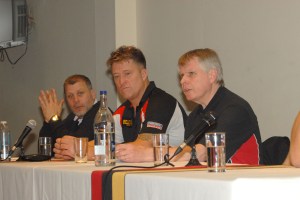 Some of the panel

Matt Diskin, meanwhile, revealed that he had assembled a young under-19 squad, which had plenty of physical development ahead of it. However, he said that his squad was extremely enthusiastic and he is attempting to build a strong culture, similar to the one in which he came of age at Leeds, a point emphasised by James Lowes, pointing out that they only gained real success when they stopped being a "buying" club and became a club that nurtured their own. After a break, questions from the floor prompted James Lowes to state that the club won't be taking any players on loan from other clubs next year without giving the U19s a go first. Also, they have no intention of going into dual registration deal with a Super League club. "We are not a feeder club" said Lowes, unequivocally. A further insight was that all of the coaches were agreed in regretting that there is not an A-team level to the game. Players are being cut by clubs at 19 years which is too young. Karl Harrison used Jamie Peacock as an example of a player who would have been lost to the game under the current system. John Bastian emphasised again his keenness to work with BullBuilder mentioning a number of ideas for the Trust might help with the "extras" for the academy. Watch this space! BullBuilder member, Karen Sykes, said, “As a parent of an academy boy I am so pleased I attended the Q&A session. I found out much more than my son ever tells me! I spoke with Matt Diskin and told him the boys think he's doing a fantastic job and are really enjoying training sessions, no matter how hard they are! Thanks to BullBuilder for arranging this evening.” Several members joined or re-joined BullBuilder during the evening. You can do the same by visiting our website at http://www.BullBuilder.co.uk/. For more information, please Email us at info@BullBuilder.co.uk or write to us at Bradford Rugby League Supporters Society Ltd, Suite 2 Buttershaw Works, Buttershaw Lane, Bradford, BD6 2DD.