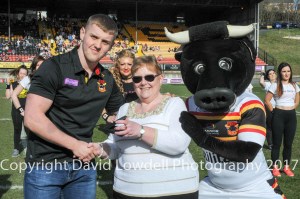 BullBuilder took time out last week to meet up with U19s player of the month Evan Hodgson. Evan is a prop forward from Stanningley who has starred for the U19s this year and earned a first team debut in the Challenge Cup versus Featherstone where he scored a debut try.  He commented: “Being a prop, I don't score many tries, so it was good to get over. I was shell-shocked and chuffed at the same time.” Asked why he chose to come to the Bulls from Stanningley Evan said “Bulls are an iconic club and I wanted to join them, plus John Bastian “pestering me”, seriously the lads have a great relationship with John.  My ambitions are now to play first grade for the Bulls on regular basis. Head of Youth John Bastian said “Evan did 72 minutes on his debut versus a top 3 championship team and did very well.  He’s still in only his second year in the academy and has so much development left in him.   He’s progressed really well and become a leader in his group and it’s about realising that potential and fine tuning those qualities going forward. To find out more about BullBuilder and how to join for as little as £10 a year please visit www.Bullbuilder.co.uk