The new season is two months old and Bulls Supporter’s Trust  BullBuilder has already picked up where it left off last autumn.   We caught up with Head of Youth Development John Bastian last week. As always John is an obliging man to chat to and he’s as positive as ever about youth development at the Bulls, despite the disruption in the close season:  “I’d say the disruption during the autumn put us back as a club by about 18months.  We lost a fair few players to other clubs who were going to be the next crop of first teamers behind the likes of Ethan Ryan and Ross Oakes.    However we will now rebuild and our young players will get some opportunities to be tested.” “It might be a lean year for the U19s but some players have already stepped up a level and first teamers like Jon Magrin and Jordan Lilley are providing real leadership and help to the young guys.” With the season now two month old John is hard at work at his main priorities for 2017. “We have three main priorities for the year ahead.  First, to get the youth education programme back up and running again.  The BTEC and Advanced Apprenticeship in Sporting Excellence courses lost two months during the autumn and we’re working to get that back up and running as normal with help from Loughborough College.” The second priority is to keep recruiting for the U19s.   We still have great links to community clubs, a strong scouting network and a detailed database of talent.   We’re always on the lookout for talented players who have a good athletic base that can be developed, a love of the sport, good morals and set themselves high standards and have a desire to achieve.  Lastly we’ll be looking to rebuild confidence in the club by being consistent and providing a reliable, secure and dependable environment.” “The upheaval of the close season has created opportunities for the likes of Evan Hodgson and Reiss Butterworth.   They’ve done very well and you wonder how much better they can become.” In order to help John and his team BullBuilder will be hosting a number of events in the coming months, the first being the BullBuilder Spring Ball at Odsal on Friday May 5th at the Provident Stadium, Odsal.   There will be a prosecco reception, and a two course meal with a live band.    Tickets are £35 each  or £325 for a table for 10 and available from the club shop.    Leon Pryce will be a guest speaker.   Dress code is lounge suits. John Bastian said “BullBuilder has always been passionate about developing our own talent.  I’m looking forward to this event and you may even see me on the dancefloor.” 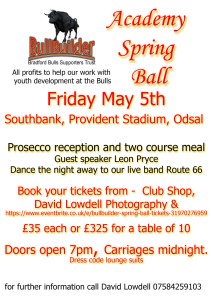