Injuries and fatigue will be treated with new cutting edge equipment this season thanks to BullBuilder, the Bradford Bulls Supporters Trust. The equipment, which has been supplied to the medical department, will assist staff in treating injuries and fatigued players from each of the club’s teams from under 16s to first team. Head of Youth John Bastian said “The equipment supplied has lifted our medical department to a whole new level of quality.  BullBuilder have always been good at identifying equipment that can benefit everyone and these latest purchases are consistent with that.” Head of Academy Medical Aaron Scholes said “BullBuilder have bought us two more Re-boot Rehabilitation and Recovery Systems and the Powerplay Kit.   The Re-boots are great for injury management and rehabilitation and also for helping players recover from particularly tough training that leaves them stiff and sore.  For example, this equipment is especially good for the bigger players as it can be used to provide a full leg massage which then frees up staff to perform other duties.  The end result is that in all cases players can train harder and recover quicker.” “They’re excellent for injury rehab too.  We have a young academy player who’s been out with a long term injury but thanks to the Re-boot system he’s been running for the first time this week.” “The Poweplay Kit has also been of great benefit.  It’s a cold compression therapy system that helps player recovery from swelling or fatigue.    It greatly reduces recovery time and now we have several of these kits we can treat many more players.” John Bastian said “This equipment, along with the ice machine already purchased by BullBuilder will have a significant positive benefit to all our players.  With over 70 junior players at the club from U16s, U19s, reserves and first team they will all be able to take advantage.  It can be a game changer for our medical department, which means it will have a knock on effect on the field too.” BullBuilder also provided new mirrors in the gym to replace damaged ones.  The mirrors were sourced via a scholarship player’s parent at a reasonable price and have been installed.   Aaron Scholes joked “The new mirrors look great and won’t be getting any cracks so long as the uglier first teamers don’t look at them.  Fortunately our younger players are better looking than them.” BullBuilder chairman Paul Butterworth said “I’d like to thank everyone that donated at recent events and for their continued subscriptions.   This equipment was chosen to have maximum benefit to all our players and is already having a great effect.” To find out more about BullBuilder and how to join for as little as £10 a year please visit www.Bullbuilder.co.uk 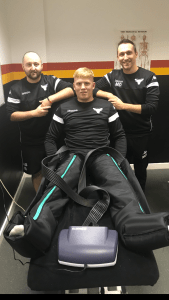