Evan Hodgson has won the BullBuilder player of the month for a second time this season. Like Jamie Peacock before him Evan is a prop forward from Stanningley who has starred for the U19s this year and earned a first team debut in the Challenge Cup versus Featherstone where he scored a debut try.  He’s continued his development since then with some strong performances for the U19s who have improved as the season has progressed. Head of Youth John Bastian said “He’s still in only his second year in the academy and has so much development left in him.   He’s kicked on since earlier in the season really well and become a leader in his group and it’s about realising that potential and fine tuning those qualities going forward. John Bastian received the award on behalf of Evan pitchside at today’s game against Swinton, and BullBuilder received a cheque for £4000 from Barclays Bank as matched funding from the BullBuilder Spring Ball.   BullBuilder chairman Paul Butterworth said:  “The matched funding from Barclays is a wonderful gesture and we are very grateful.  It will be put to good use developing our young players.” “The donation will go toward funding of IT equipment to enable coaches and players to access the NACSPORT Analysis System.  This will provide education and development not only to our younger junior players but also our coaching staff.” Head of Youth John Bastian said “The Spring Ball was a great success and we are extremely grateful to Bull Builder and Barclays Bank, (Claire Stirk, Craig Ricketts, Vicki Seal, Leigh Beeby and Amy Morgan) for their continued backing.” To find out more about BullBuilder and how to join for as little as £10 a year please visit www.Bullbuilder.co.uk 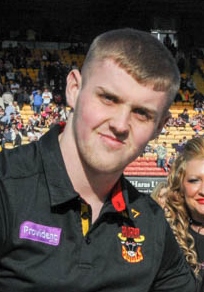